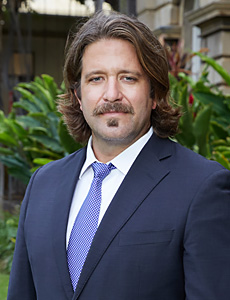 Trevor Potts began his legal career in 2015 after opening his own criminal defense practice in San Diego, California right out of law school. There, he advocated for the rights of individuals who were charged with misdemeanor and felony crimes. In 2017, he moved back to his home state of Hawai‘i where he joined his father’s practice in Honolulu where he began representing individuals and families that have been aggrieved by the wrongdoing or negligence of others, including corporations, state and local governments. He is admitted to practice in the state courts of California and Hawai‘i, as well as the federal courts for the Southern District of California and the District of Hawai‘i.

A respected voice in the field, Mr. Potts is affiliated with a number of professional organizations, including the Hawai‘i State Bar Association, the Federal Bar Association, Hawai‘i Attorneys for Justice, the State Bar of California, the San Diego County Bar Association, and the American Bar Association. He has been recognized throughout his career for his contributions. In law school, he was awarded the Jefferson Medal for Sports Law from the Thomas Jefferson School of Law, the Witkin Award for Academic Excellence from the Witkin Legal Institute, the CALI Excellence for the Future Award from the Center for Computer-Assisted Legal Instruction and graduated with Honors from the Thomas Jefferson School of Law. As a licensed attorney, he was awarded the Top 40 Under 40 by The National Trial Lawyers every year since 2017, the 10 Best Attorneys in Hawai‘i by the American Institute of Personal Injury Attorneys in 2021, 2020 Nationally Ranked Top 10 Under 40 and the 2021 Nationally Ranked Top Attorney Award by the National Academy of Personal Injury Attorneys, and the Top 10 Attorneys for Personal Injury for Hawai‘i for 2021 and 2022 by the Best of the Best Attorneys.

As an avid outdoorsman, Trevor enjoys surfing, swimming and hiking. Some of his favorite locations to visit include the Big Island, Central Oregon, and Yosemite and Teton National Parks.

A sample of some of Trevor’s case results include: